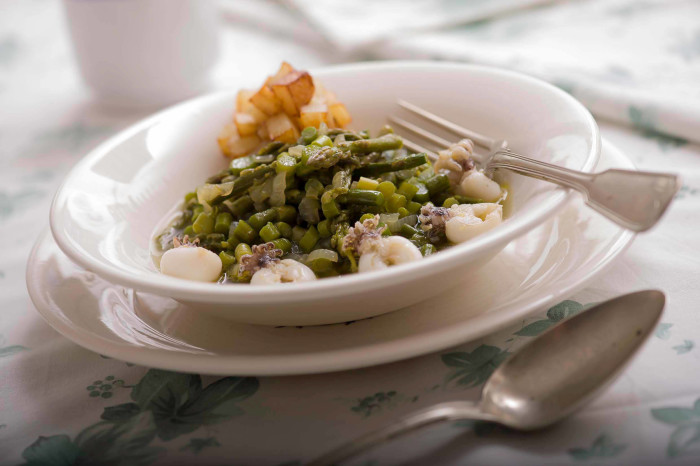 Procedure
Prepare a light broth by washing half peeled and divided onion in four, the peeled and peeled carrot and the celery husked and cooking them in a pot with initially cold water for about 45 minutes;  at the end, regular salt.

Eliminate the leathery part of the asparagus stalk, peel only the stalk, wash them carefully and cut them into thin slices, leaving the tips intact;  clean the leek, cut it into slices, brown it with the remaining half of chopped onion in a pan with 2 tablespoons of oil.  Add the asparagus, tips included, and cook for 25-30 minutes, stirring occasionally, gradually adding the necessary hot stock and adjusting salt at the end.

In the meantime clean the cuttlefish, removing the entrails contained in the bags, the eyes and the beak in the center of the tentacles, wash them carefully under running water, then transfer them into a steamer basket and cook for about 20 minutes(take care to add the tarragon to the 'cooking water to make it aromatic).  At the end, transfer the cuttlefish in a bowl and season with a pinch of salt.

Wash the potatoes, rubbing them carefully and cut into regular cubes;  cook them in a non-stick pan with plenty of oil for frying, turning them as soon as a golden crust is formed, until they are crispy.  Drain them with a skimmer on absorbent kitchen paper and season with 2 pinches of salt. Divide the asparagus soup into individual dishes, complete it with the cuttlefish and cubes of potatoes and serve.